As Every Detail Counts

The process of identifying victims of mass or major disasters are indeed difficult by visual recognition. Even harder when there a disaster resulting in the deaths of nationals from many different countries as what happen during the air plane crash.. 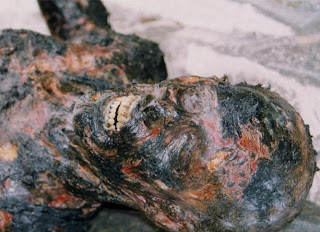 Dead victim of severe burn trauma (>90%) which can be seen in air plane crash like the photo here is definitely impossible to be recognized only through naked eyes. But the fact that the dental structure, skull, and bones are still preserved are of which how forensic anthropology plays their role for the identification procedure.
(Photo courtesy of grantmasonfx)

PRINCIPLE OF FORENSIC ANTHROPOLOGICAL IDENTIFICATION
There are 4 important characteristics to be determined for the identification of the dead person: race, sex, age, stature. I'll go through this one by one:) 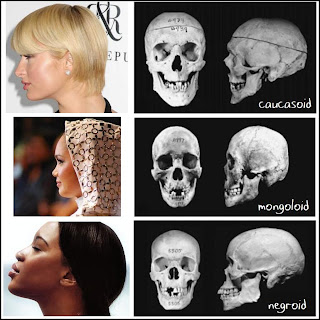 Morphologically, race differences are most pronounced and observable in the skull, with the facial skeleton being the most diagnostic portion.
Just click this picture to enlarged. You can study Paris Hilton, Siti Nurhaliza, and Naomi Campbell faces to make comparison of these 3 major group of races^^
The most distinctive Mongoloid feature is the cheekbones. Mongoloid (which includes me, hehe) exhibit high malar projection, both anteriorly and laterally, as well as a malar tubercle at the inferior aspect of the zygomaxillary suture. Should I say, more often than not, we the Mongoloids don't have to use blusher to "show" our cheek^^

According to Prof. drg. Etti Indriati, one of the best racial indicators is alveolar prognathism. In Negroids, the tooth bearing portions of the jaws protrude noticeably in contrast to the straight or orthognathic face of Caucasians and Mongoloids.
Table below lists some craniofacial features that have been linked to race in the three major groups. 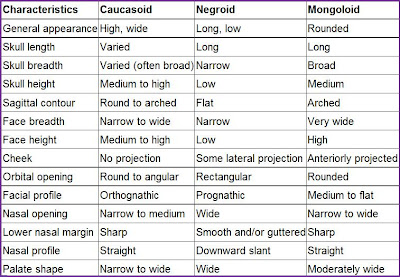 Remember: A mixed- blood person such as a daughter of a Mongoloid's mother and a Caucasian's father will have mixtures of both features:)


SEX
Morphological differences of male and female are significant at the skull and the pelvis and most sources say that pelvis is the best sex-related skeletal indicator because of the distinct features adapted for childbearing:) 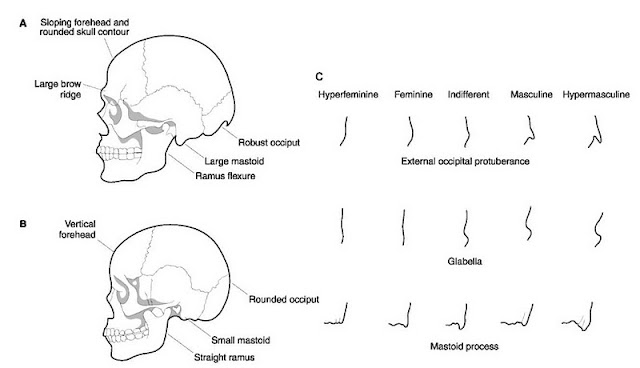 Remember: Humans vary both temporally and spatially. To this one may add variation arising from growth factors, environmental stress and pathology or trauma.
Pelvis differences:
There are 3 most pronounced differences can be put into comparisons:
1. Pelvic outlet
2. Sciatic notch
3. Supra pubic angle (subpubic) 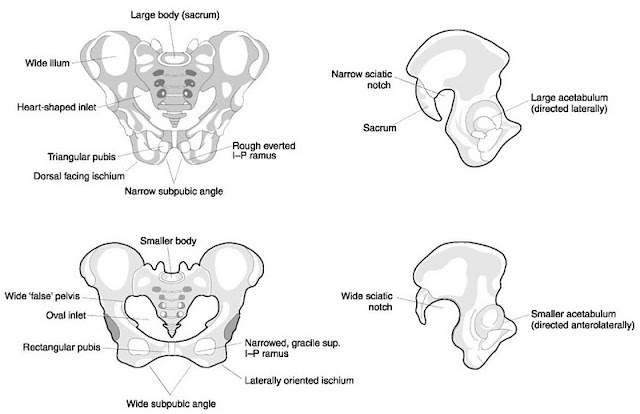 The female pelvis is designed to accommodate childbirth as an addition to the same requirements for males which are as a support and locomotion. Wider suprapubic angle and outlet are very much beneficial for the purpose.
A uniquely male trait is the rough everted area of the medial border of the ischiopubic ramus for the attachment of the crus (corpus cavernosum) of the penis. This ramus is more gracile in females and narrows as it approaches the symphysis. Just click the picture to enlarge so what I explain can be seen thoroughly:)


AGE
The estimation of age at death is the most challenging once adulthood had been reached. How humans look as they age is orchestrated by the complicated interplay of genetic, environmental, and cultural factors. However, there are some basic biological processes that all humans undergo from the prenatal months --> infancy --> childhood --> adulthood which I'll explain here: dental and skeletal biological processes. 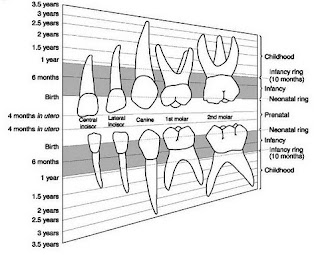 The estimation of age for children is quite easy as the developmental pattern of the child reflected in the eruptions period of the deciduous and permanent teeth. Image below may give a very clear and good guidelines for identification. 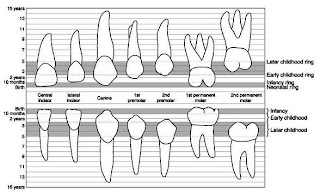 Eruption of permanent teeth
Tooth wear is likely to have the best relationship to broad or general age categories and there's a comprehensive approach to dental aging based on this concept. It's designed to assess a number of characteristics of a cross-section of a tooth including attrition, periodontosis, secondary dentine, cementum apposition and root resorption.
Picture below shows the age phases of dental wear in the maxilla and mandible: 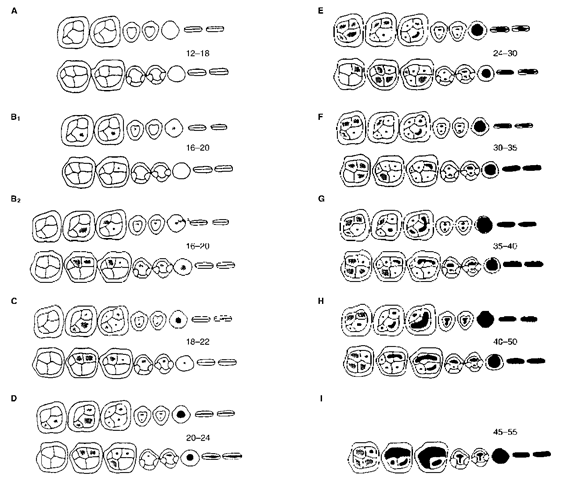 Remember: The findings may be differ from what the theory stated. Factors may include the significant racial dimorphism, widely varied diet, socioeconomic status, and even access to health and dental care- anything which is possible to be taken into account to.
Skeletal biological process:
Picture below shows the key features distinguishing the pubic symphysis phases in males. The pubic symphysis of both females and males go through similar phases, but the exact nature of these changes can be altered in several ways :) 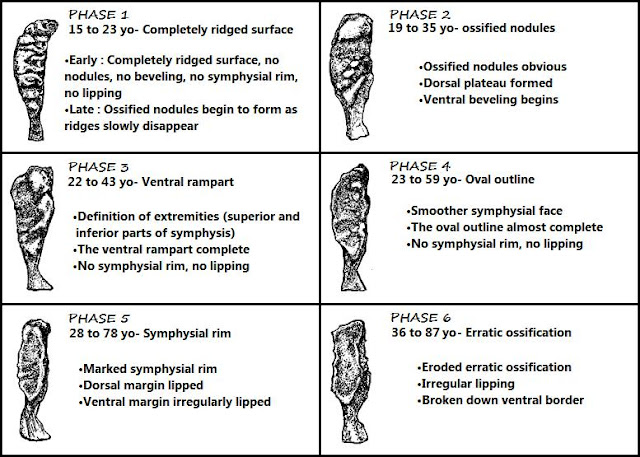 This identification thingy is somewhat lots harder than how the theory goes. To be honest, for me, it's quite hard to really distinguish the line, the lipping, borders and etc even if there are already photos and details provided. Years of experiences are very much needed to cope with this matter..  Insya Allah, I'll reach that level.


Back to INDEX
References:
Posted by نورتوفيقا at 5:21 PM

نورتوفيقا
University of Gadjah Mada medical student. This blog is actually an assignment of Block 4.2: Health System & Disaster. Go to INDEX to see full list of my reflections on the topic. I'm proceeding to my clinical year now and I shall continue blogging on medical and health stuff here whenever I have the chance to. May this blog benefits us all:)

Together We Help Indonesia's Disaster Victim!" 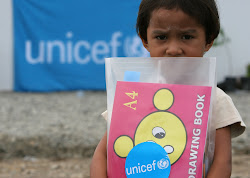 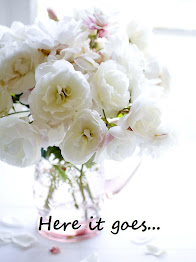 The Other Side of Me^^